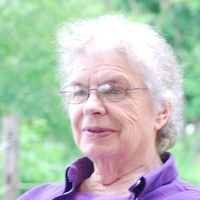 Violette Rose (Nelson) Julian (Vi), 90, of Pelican Rapids, MN died on Wednesday June 20, 2018 at the Sunnyside Care Center, Lake Park MN. Visitation will be held Friday, June 29, 2018 from 4 – 6 pm with a prayer service at 6pm at the Larson Funeral Home, 304 3rd St. SE, Pelican Rapids, MN Vi was born on October 24, 1927 in Moorhead, MN to Gust and Sina (Hendrickson) Nelson. Vi was a proud graduate of Oak Grove Lutheran High School, Fargo N.D. and stayed in contact with her high school classmates for her entire life.  After high school Vi moved to Chicago, IL where she met her future husband Richard Julian, they were married in March 1947 and were married for 37 years. They raised 3 children, Rick, Cindy, and Gary, living in  Chicago, IL until 1958 when they moved to Maywood, IL.  Vi wrote about that time period: “Some of my happiest memories are the years I worked in Scouting” she was a Den Mother for the Boy Scouts of America, Brownie Scout Leader and Girl Scout Leader. Their next big move came in 1962 “on to the land of sky blue water” Pelican Rapids, MN where she resided until 2014 when she moved to Sunnyside Care Center in Lake Park, MN. Vi and Richard ran a successful business “Red Feather Antiques” featuring Red Wing Pottery, Depression Glass, Primitives and Collectibles. Vi was very active in Sweet Adeline’s for many years serving as an officer and writing the majority of the productions they put on, as well as a Christian Clowning group where they sang and visited many area nursing homes and churches. “I am not a “Christian clown”. I like to think of it like this, I am a Christian, a Christ follower, who uses the art of clowning to serve people and to minister the good news, therefore I am a Christian and a clown who is involved in clown ministry.” Vi also was a charter member of the “Red Hats Society” where she declared herself “Chapter Queen”! Vi was also a proud member of the Write Stuff Writer’s Group for over 16 years. Vi took her first writing class in college (where she worked) and has been writing ever since. She became a published author in 2008 writing a collection of poems entitled “The Three Old Biddies” About the three old biddies, Vi says “I got to know them as I wrote about them.  Names have been changed to protect the innocent.” Vi enjoyed working as a secretary at Fergus Falls Junior College for many years where she enjoyed meeting and mentoring the students. Vi loved being a Grand/Great Grandmother, and she was the most happy when she had “family” around. Vi was also a devoted animal lover, there was hardly a time when she didn’t have at least two pets, one cat and one dog, until a stray would come to the house and the family would grow. Vi was preceded in death by her parents Gust and Sina Nelson, Her husband Richard, brother Orville, Sister in law (and best friend) Mae Nelson. Vi is survived by Children:  Rick (Sharon) Julian, Gary (Annabelle) Julian, Cindy Julian, and her “adopted daughter” Eileen Erickson. She also leaves behind: Grandchildren DeAnna (John) Slevin, Nicole (Craig) Twisk, Alex Julian, and Michelle (Arellanos) Chilson.  Great grandchildren: Elizabeth Julian, Evan Twisk, and Kyle Twisk. Nieces: Sandra Lindstrom and Nancy Jo Wong. We want to send a special Thanks to the Sunnyside Care Center Staff for the excellent and loving care you gave to Vi.In lieu of flowers memorials preferred to Sunnyside Care Center or Zion Lutheran Church. Please keep the Julian family in our thoughts and prayers. Violette "Vi" 's Memorial Folder
To order memorial trees or send flowers to the family in memory of Violette "Vi" Rose Julian, please visit our flower store.