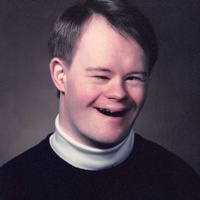 Robert Alan Toftely, affectionately known as Remby, age 58, died on September 18th at Abbott Northwestern Hospital, Minneapolis, MN.  The youngest of 6 children, he was born in Pelican Rapids, MN on November 14, 1959 with Down Syndrome.  His parents were Edwin (Ole) and Doris (Nelson) Toftely, both of Pelican Rapids, who cared for Remby in their home until he was 42 years old.  After Ole died and Doris was no longer able to care for him, Doris and Remby were moved to the Twin Cities to be close to family. Robert loved music and family gatherings, in particular his big birthday parties. He enjoyed spending all holidays with his family and delighted in looking at the Christmas lights.  He spent his summers at the family cabin on Jewett Lake.  Remby was the center of the family and very well loved.  He always brought out the best in everyone; to know him was to love him. Remby is preceded in death by his parents, Doris and Edwin. He is survived by his 5 siblings, Phillip of Minneapolis, MN, Rosemary Daniels of Wayzata, MN, Richard of Fergus Falls, MN, Thomas of Siren, WI, and Steven (Jean) of South Haven, MN; 2 nephews: Michael Toftely of Fairfield, CA and Erik (Danielle) Toftely of Beaufort, SC; 1 niece, Lisa (Ryan) Zylstra of Monticello, MN; 3 grandnephews: Dylan Toftely, Ezra and Finn Zylstra; 4 grandnieces: Savannah and Madelyn Toftely, Aurora Toftely and Lacey Zylstra. Memorials preferred to The Arc or Down Syndrome Association of Minnesota in memory of Robert Alan Toftely.   Visitation: One hour prior to the service at the funeral home. Service: 2:00 p.m., Saturday, September 22, 2018, at Larson Funeral Home, Pelican Rapids, Minnesota. Burial: Lake Lida Baptist Cemetery, Pelican Rapids, Minnesota. Clergy: Pastor Rob Sandstrom Please keep the Toftely family in our thoughts and prayers. Robert's Memorial Folder
To order memorial trees or send flowers to the family in memory of Robert Toftely, please visit our flower store.