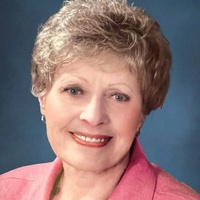 Mary Carol Peterson, aged 85, passed away on April 24, 2022 in Buffalo, Minnesota with family at her bedside. She was born in Minneapolis on December 5, 1936, the first child of Julia Johnson and Harold Sorensen. Her youth was spent in Minneapolis, and she enjoyed many summers on her Danish-immigrant grandparents’ farm near Tyler, Minnesota. At age seven, Mary Carol contracted polio and credited her ability to walk to Sister Kenny, who treated Mary Carol firsthand, at the Minneapolis Sister Kenny Institute. Mary Carol was raised with an appreciation for art. While recovering from polio, she spent hours painting.  She later attended classes at the Minneapolis Institute of Art, and she graduated from high school in Minneapolis.

On June 24, 1961 Mary Carol married the love of her life, Gary Peterson, in Minneapolis and soon settled near his hometown of Pelican Rapids with her two young daughters, Julie and Cynthia. Together, they built a good life for their family in Pelican Rapids, as Gary gradually assumed the duties of publisher at the Pelican Rapids Press. For several years, Mary Carol wrote the closely followed “Local News,” a summary of social occasions among Pelican-area families. She was the first car saleswoman in Ottertail County, working at a dealership in Pelican.

Mary Carol and Gary raised four children together in Pelican Rapids. When the children were older, she pursued her passion for art full time. She won numerous awards from many juried art shows and was a member of the Gallery 4 artists’ cooperative based in Fargo. Her pastel paintings captured scenes of the local countryside and were featured on Courage Cards, Northwest Airlines’ first-class menu, and Smead Corporation’s Christmas card. She also had a passion for drawing historic family homes and famous scenes around Pelican Rapids, painting her grandchildren and their pets, and creating mixed-media decorative objects. Through her friendships with artists and involvement in regional galleries, she volunteered with young artists to help advance their careers, including Star Wallowing Bull and others.

Her passion for the arts deeply influenced the family’s home, which was truly filled with beautiful art and books. Mary Carol and Gary shared a love of theater, art galleries, and classical music, and introduced their children to all of these art forms and more. She also had a lifelong passion for gardening, from her tomatoes and raspberries to the many ornate flower beds she tended around the family home. Summertime visitors could count on a guided tour of the gardens, and any time of year was ripe for sharing coffee, cookies, and her latest works of art.

A memorial service for Mary Carol will be held at Trinity Lutheran Church in Pelican Rapids on Monday, May 2 at 2pm, with visitation starting at 1pm and coffee and treats after the service. Gifts to local charities are encouraged to honor the memory of Mary Carol Peterson.

Please keep Mary Carol's family in your thoughts and prayers.

If Live Stream doesn't work, a recorded version will be available at a later time. 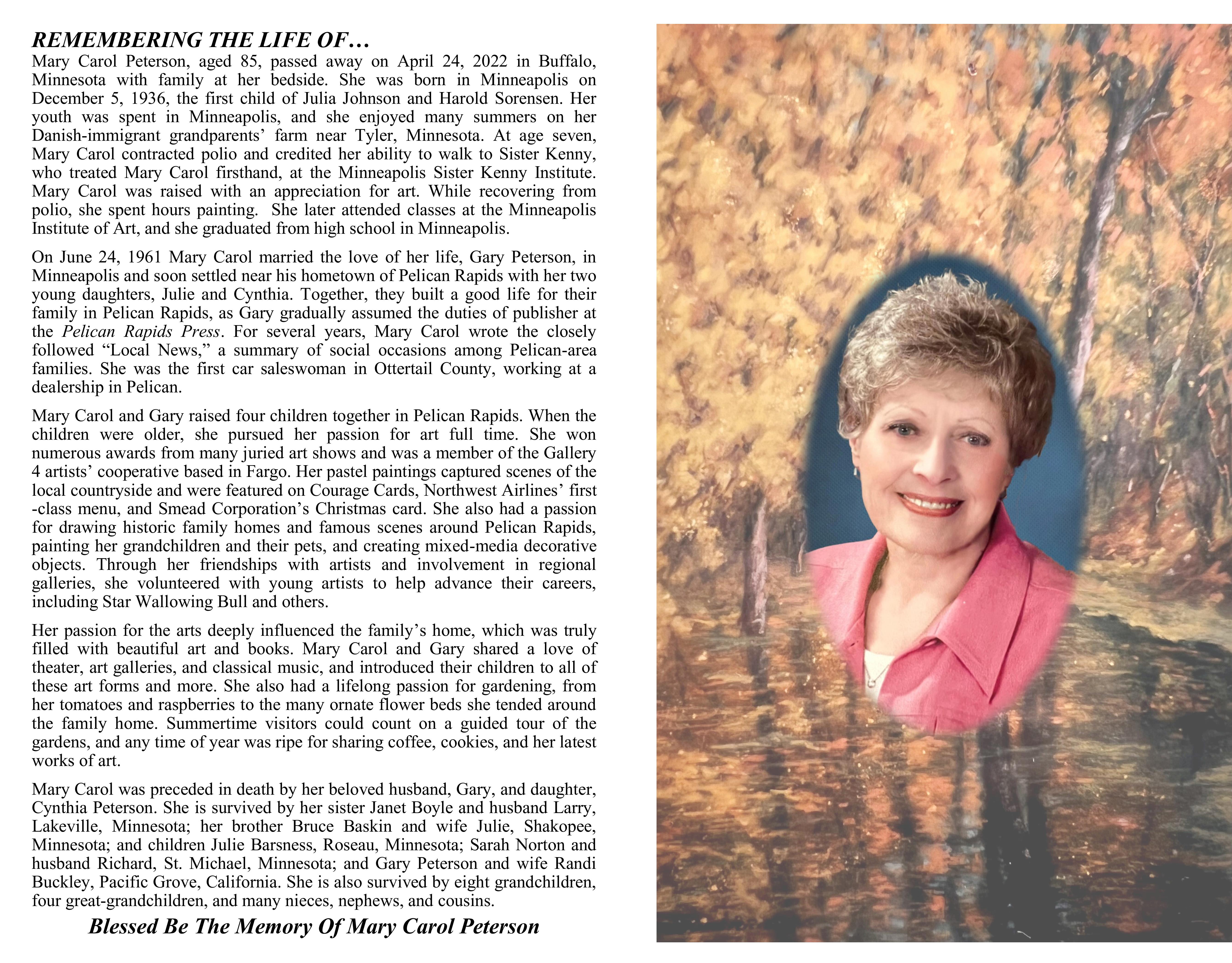 To order memorial trees or send flowers to the family in memory of Mary Carol Peterson, please visit our flower store.