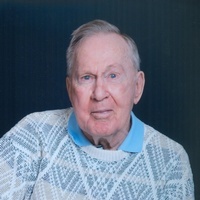 Lynn Brokke Lundin was born on March 10, 1928 at the Swedish Hospital in Minneapolis, MN the son of Harold Lewis and Anna (Brokke) Lundin. On August 26, 1951, he married Miriam “Snella” Hoplin at St. Paulie Church in Lowry, MN. The couple resided in Columbia Heights, MN from 1956 to 1999. In 1999, they moved to Pelican Rapids, MN. Lynn was a member of Salem Covenant Church in New Brighton, MN and a member of the Trinity Lutheran Church in Pelican Rapids, MN. He graduated from Edison High School in 1946 and went onto Augsburg College, where he graduated in 1950 and then served in the U.S. Army Ready Reserve from 1950-1956. He also attended the University of Minnesota and graduated with a Masters (plus 45) in Education in 1960. He was a College Instructor and Coach of football, basketball, and baseball at Bethel College from 1953-1960, a PE teacher from 1960-1964 at Richfield Junior High, and a PE and Health teacher at Columbia Heights High School from 1964-1990. At Columbia Heights High School, he coached wrestling, cross country, cross-country skiing, and track and field. Lynn’s athletes called him ‘coach,’ and years even later, when many of his athletes spoke with him, they still called him ‘coach.’ Those who knew him said that he was “one in a million,” “the best coach,” “much more than a coach,” and that he taught so many people “how to work hard.” He was passionate about woodworking, cross-country skiing, state parks, hiking, remodeling, Scandinavia, coffee, telling stories, travel and driving. Lynn Lundin, age 90, a resident of Pelican Rapids, MN, died on Tuesday, May 29, 2018 at Ecumen Emmanuel Nursing Home in Detroit Lakes, Minnesota. Preceding him in death were his parents, Harold Lewis and Anna (Brokke) Lundin; brother, Paul Lewis Lundin; and daughter-in-law, Louise Sasso-Lundin Lynn is survived by his wife, Miriam “Snella” Lundin; five children: Phil (Sue Bruen) Lundin of Apple Valley, MN, Joel (Joelle) Lundin of Monticello, MN, Paul (Donna Leicach) Lundin of Minneapolis, MN, Peter Sasso-Lundin of Pelican Rapids, MN, and Ann (Don) Lundin-Hurley of Dent, MN; eight grandchildren: Dan, Teresa, Kaia, Britta, Phil, Meghan, Michael, and Keeghan; and three great-grandchildren: Kai, Solvei, and Giselle, along with many nieces and nephews. He will be cremated and buried at a later date with his wife, Miriam, at Fort Snelling Cemetery. Visitation: Saturday, June 2, 2018, from 1:00 p.m. to 2:00 p.m. at Trinity Lutheran Church, Pelican Rapids, Minnesota. Memorial Service: 2:00 p.m., Saturday, June 2, 2018, at Trinity Lutheran Church, Pelican Rapids, Minnesota. Clergy: Pastor Scott BlockPlease keep the Lundin family in our thoughts and prayers. Lynn's Memorial Folder
To order memorial trees or send flowers to the family in memory of Lynn Lundin, please visit our flower store.