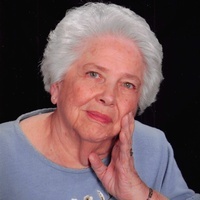 LaVerne Simons, age 91, a resident of Alexandria, Minnesota, formerly Pelican Rapids, died Tuesday, June 12, 2018 at Connie's home in Alexandria. Sunday’s Child, LaVerne Martha, was born with black hair and green eyes to Herman John and Laura Adelaide (Gutekunst) Schmidt on July 11, 1926 in Minneapolis, Minnesota.  LaVerne was raised in Minneapolis, Chaska (where she was confirmed on Palm Sunday, 1940), Remer and Perham (where she graduated High School, class of 1944). LaVerne then told her parents she was going to Chicago to further her education at St. Vincent’s Hospital and Infant Asylum, popularly known as St. Vincent’s Orphanage. Off duty, she and her friends would walk to Navy Pier to greet the soldiers or listen to the popular, now famous musicians of the day.  One of her classmates asked LaVerne to take over corresponding with an overseas soldier, Vernon Simons.  Vern and LaVerne were married on June 8, 1947 in Perham, Minnesota.  After one year in Jamestown, North Dakota, they returned to Perham with their baby girl and increased their family, totaling nine by 1958. Favorites of LaVerne were Lily of the Valley, English Sheep Dogs, shrimp salad, tea, and the color blue.  She hated funerals, the color purple and feared heights.  Hands down, her favorite of everything were babies and children.  She taught love, life lessons, patience, acceptance, and sacrifice by example.  Circumstances as they were were frequently questioned and she always had ideas for improvement to the point of threatening to run for office including Mayor and President.  Her parenting was governed by what “it says in the Bible” (her personal version) and the occasional wooden spoon.  Their primary parenting motto was, “We did the best we could with what we had/knew at the time.”  Living through The Depression taught her to be thrifty, so she kept anything that could possibly serve a future purpose, which proved prudent.  LaVerne was a consistent pen pal with many relatives and friends, sitting down every morning to write to someone. She mastered the roast turkey dinner and hosted countless meals.  The grandchildren each went on a week’s vacation every summer. She cherished her time getting to know them as individuals and teaching them new skills.     LaVerne had the softest hands, a positive empowering attitude, quick wit, a silly side and a stealth wink. Being the character she was, her teasing meant she liked you.  She believed in people, embracing the world, its diversity and especially the youth. LaVerne would have traveled endlessly if time, health, and finances had allowed.  Great faith and tradition led her through a challenging and rewarding life.  She shared her baptismal gown with several of her children and grandchildren. Her love for Jesus was evident in her lifestyle and teachings.  Without a doubt, she knew the plans He had made for her! LaVerne was a leader with vision throughout her lifetime.  She applied herself in leadership roles in every church she was a member of as Sunday School Superintendent, Ladies Aid and WELCA president, WELCA Synodical Board and Luthercrest Board of Directors. She also served on the Pelican Valley Hospital Board, West Otter Tail County Fair Board, and Homemakers. Being a proud, stubborn German likely helped her come close to achieving her goal to live to be 100.  Early Tuesday morning, June 12, 2018, one month shy of completing her 92nd year, LaVerne completed her earthly life and received her crown of glory. LaVerne joins her parents Herman and Laura Schmidt, sister Baby Girl, younger brothers Herman John Jr. (Buddy) and Herbert, as well as her husband Vern (1997), daughter Susan (2003), and sons Larry (1996) and Terry (2004) and Great Granddaughter Taeya Mae (2002). Celebrating LaVerne’s life are her family, daughter Susan’s husband Stan and children Shannon (husband George and children Baily and Ietta Veeder; Jason (Dulcie) Clark; Karron (husband Jeremy and children Zoey and Keaton Alford); son Larry’s wife Joyce and children Janae (husband Brad and children Kalista and Jaden Pearsall and David and Jarret Jenson); Leah (husband Gary and children Ethan and Avery Burke); Staci and daughter Katrina Cahill; Laura (husband Joel Stinson); son Jerry (wife Linda and daughter Andria); son Gary (wife Marie, daughter Nicole (husband Jared and children Owen, Abraham and Solomon Anderson);  daughter Lindsey (husband Joseph and children Jaylyn, Johanna, Brianna and Bryleigh Lindley);  daughter Connie Simons; daughter Patti (Michael Boen) and children Kelli (husband Peter and children Simon and Vivvi Johnson);  Janna (wife Danielle and children Max and Baby Boy McKay), and Joel Davis; as well as many extended family and friends. Visitation: Saturday, June 16, 2018, from 12:30 p.m. to 2:00 p.m. at Faith Evangelical Lutheran Church, Pelican Rapids, MN.  Service: 2:00 p.m., Saturday, June 16, 2018, at Faith Evangelical Lutheran Church, Pelican Rapids, Minnesota. Burial: St. Paul’s Lutheran Cemetery, Perham, Minnesota. Clergy: Pastor Michael Buller Please keep the Simons family in your thoughts and prayers.     LaVerne's Memorial Folder
To order memorial trees or send flowers to the family in memory of LaVerne Simons, please visit our flower store.