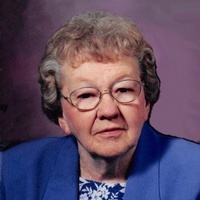 Gladys (Scott) Johnson, age 98, a resident of Pelican Rapids, MN, died Monday, April 1, 2019 at Pelican Valley Senior Living, Pelican Rapids, MN. Gladys Adeline Scott was born on June 30, 1920 at Doctor Boysen’s Hospital, the daughter of John and Tillie (Hanson) Scott.  She graduated from Pelican Rapids High School in 1937.  On July 12, 1941 Gladys was united in marriage to Berthel Johnson at the Central Lutheran parsonage.  They began their life together on the farm.  Together they raised four children: Rick, Mike, Greg, and Brent.  She remained on the farm until age 95. Gladys was a lifelong member of Central Lutheran Church where she was baptized and confirmed. She was active in WELCA, circle, and quilting.  For many years Berthel and Gladys were 4-H leaders and involved in the Eastside Farmers Club.  In 1993 they were honored as the U of M Farm Family of the year.  Berthel and Gladys were passionate about their Swedish heritage.  They visited Sweden many times and hosted Swedish guests almost every summer.  Gladys enjoyed taking care of others, whether it be at her kitchen table for toast and coffee or the many years she was a caregiver for her parents and husband. Gladys was especially proud of her family. She enjoyed life on the farm by tending to her flowers, feeding the barn cats scrambled turkey eggs, and keeping up to date on all the farm activities. Gladys is survived by two sons: Eric “Rick” Johnson, Pelican Rapids, MN; Brent (Stephanie) Johnson, Sweden; daughter-in-law, Dawn Johnson, Pelican Rapids, MN; six grandchildren: Andrew (Gretchen), Adam (Sara), Greta, Alex (Ashley), Dana, and Maria (Kyle Bednar); four great-grandchildren: Olivia, Madilyn, Carter, and Marleigh; and many nieces and nephews. She is preceded in death by her husband Berthel; two sons: D. Michael and Gregory; daughter-in-law Marlys; sister Alvina (Norman) Restad; brother Weldon (Sidsel) Scott.   Visitation: Saturday, April 6, 2019, from 10:00 a.m. to 11:00 a.m. at Central Lutheran Church, Pelican Rapids, MN. Funeral Service: 11:00 a.m., Saturday, April 6, 2019, at Central Lutheran Church, Pelican Rapids, Minnesota. Clergy: Pastor Phillip Tobin Burial: Central Lutheran Cemetery, Pelican Rapids, Minnesota   Gladys's Memorial Folder
To order memorial trees or send flowers to the family in memory of Gladys Johnson, please visit our flower store.