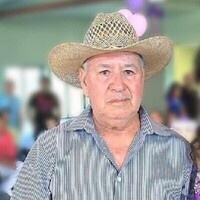 Eron Franco Martinez was born on October 9, 1951 in Uriangato, Guanajuato, Mexico to Manuel Franco and Matilde Martinez. He is the oldest of nine children. He grew up in Mexico and was married in Mexico. He moved to the United States in 1984 and lived in California for many years, working in the fields and picking fruits.

In 1995, Eron moved to Pelican Rapids, MN where he began working at West Central Turkey Plant. He worked there for over 20 years before retiring. Following retirement, he continued working, loading turkeys on area farms for processing.

Eron loved to fish for catfish on the Red River. If he could do it every day, he would have. He also enjoyed visiting and spending time with his family members. He will be remembered as a nice and kind person who was extremely likable. You could be his friend no matter what color of your skin.

He is survived by family in Mexico, including his wife Guadalupe and four sons: Raul, Miguel, Eduardo and Sergio; and family in the US including brothers and sisters in Pelican Rapids and elsewhere. He also is survived by many special nieces and nephews.

Eron was preceded in death by his parents.

To order memorial trees or send flowers to the family in memory of Eron Franco Martinez, please visit our flower store.