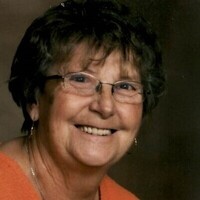 Dorothy Ross, age 78, a longtime resident of Pelican Rapids, died under the care of Hospice of the Red River Valley in her daughter Kim’s home near Dent, MN on Saturday, August 8, 2020.

Visitation will be from 4-7 PM, Friday, at Larson Funeral Home in Pelican Rapids, MN. People coming to visitation are encouraged to bring nonperishable food items to be donated to the Pelican Rapids Food Shelf in honor of Dorothy. You are also asked to wear your masks and follow the social distancing guidelines.

Graveside services will be held 3:00 PM on Saturday, August 15, 2020 at East Lake Lida Cemetery with Pastor Sharon Harding officiating.  Please bring a lawn chair to use if desired.

Dorothy Felker was born on January 26, 1942 to Archie Darrell and Katherine Christina (Nesslien) Felker in Audubon, MN. She attended school in Audubon, graduating in 1959. After high school she attended Detroit Lakes Business College. On July 15, 1961, she was united in marriage to Michael Joseph Ross in Audubon, MN. Following their marriage they started out in Pelican Rapids, MN for a short time, before moving to rural Dent, where they lived and raised their three children, until 1993 when they had a house fire, they then moved to Mike’s childhood home on East Lake Lida Road. Shortly after Mike’s death in 2003, she moved to Mill Pond Estates in Pelican Rapids, until January of 2019, when she went to live with her daughter in rural Dent, until the time of her death.

In the early 70’s, she worked at Ords in Pelican Rapids. After they moved to rural Dent, Dorothy stayed home and raised her children, sold Avon for many years, and babysat for area children. Dorothy loved children and had many families she babysat for in the 80’s and 90’s. In 1993, Dorothy was ordained in the Community of Christ Church. Her strong faith guided her actions and she used her faith to witness and help others. In 1998, she started working at the Headstart Program in Pelican Rapids where she continued until 2015.

In 2005, she started working at the Pelican Rapids Community Food Shelf, she was the director for many years. In 2018, she “retired” as director, but continued to work there until March of 2020.

She served as minister of 1993-2008 at Frazee Community of Christ Church, she also helped out at the Congregational Church in Pelican Rapids.

She was preceded in death by her husband Mike in 2003, her parents, three brothers: Richard, Wallace Longtine and Clint Felker, and nephew Terry Longtine, sister in law Jeanette Longtine. Dorothy's Memorial Folder
To order memorial trees or send flowers to the family in memory of Dorothy Ross, please visit our flower store.