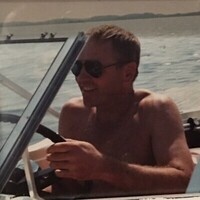 Don grew up on the family’s Linden Shore Resort on Lake Lida & the adjacent shared Johnson family farm.  As a boy, he had two major loves; baseball & horses, both of which became lifelong passions.   He’d play baseball in the pasture for hours on end with his brother (Wes) & cousins (Mike, Rick, Greg & Brent).  At a young age, he got his first horse (Queen)… that began his personal endeavor & his unique gift of being a horseman & a cowboy.  Don was a 'country school' kid, as he termed it with pride, and graduated from Pelican Rapids High School.  Resort life was teaching guests how to ski, accommodating with a twinkle in his eye and a huge boyish smile, while helping farm & caring for animals ignited his curiosity to where his passion would someday grow.

After high school, he served in the United State Army, where he excelled and grew.  Upon arriving back home in Pelican Rapids after serving, he continued helping with the family resort, drove school bus & began playing town team baseball.

He soon married, bought a near-by farm and begin what he called, life.  He always said that’s when his life really began.  He dairy farmed 250 acres on the prettiest little farm just east of Pelican, where he raised horses & girls.  His girls had his heart & he raised them well.

He stayed active with baseball, Saddle Club (hangman with Rex & team penning with Al), horse trips to SD & taking Central Lutheran youth to Twins games & on canoe trips.  He was all about family & farming. Don had a special love for children & animals, and they loved him right back.  He innately saw significance in the most intricate parts of nature & people.  He was quiet, a thinker and the most patient person.  He had the biggest, most genuine smile & the most generous giving nature.  He possessed an unwavering work ethic & determination -yet remained humble to the core.  John Deere tractors and country music were always his staple.  Iced tea at the kitchen table is where his best conversations occurred.   Always interacting with kids & animals… & typically talking someone into playing catch or watching the Twins with him.

After farming for 35 years, he retired and began driving school bus again.  He also stepped into the season of being a Grandpa.  This is where his greatest love lay.  Mason, Lauren, Hazel & Bricker were his heartbeat, and this is where his family learned the lesson of a soul mate.  One would assume that one’s soul mate is their love interest/spouse, Don taught that a soul mate is the soul that sees your soul. his were his 4 grandchildren.

Don spent the last years of his life in Pelican Valley Nursing Home as he battled Parkinson’s disease.  This is where he found a second family in the nurses and care givers at PVNH.  He experienced the most incredible care & genuine love from them.
His huge smile, strong physique & gentle nature are etched in our hearts and memories.
Don embodied the definition of: the true richness of life.      That is his legacy, & his family will proudly carry that legacy forward (-Monica, Gary, Mason & Lauren Kaiser.  -Molly, Casey, Hazel & Bricker Haugrud)

Accompanying you to this place has been the pleasure of a lifetime.  - unknown

A Country Side Celebration of Don’s life will be held at his old farm.

To order memorial trees or send flowers to the family in memory of Donovan Johnson, please visit our flower store.