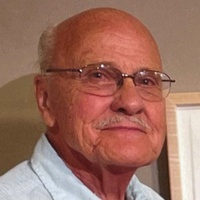 Arlo Gene Lund, age 89, of Moorhead, MN died Friday, March 12, 2021 at home with family. Arlo Gene was born at home in Fargo North Dakota, to Hjalmer and Annie (Lammers) Lund on August 19th, 1931, joining his older sister Fara Mae. His first recorded name was “Baby Boy Lund”. His mother finally officially named him Arlo Gene, but never once called him Arlo, always calling him “Tubby” due to his birth size. He married Shirley Iszler of Ashley, North Dakota on November 24th, 1956 and raised two sons. Only officially educated through the eighth grade he had a life-long thirst for knowledge, which he found in the pages of books and magazines and documentary movies. Tubby was given the eyes of an artist and the hands of a master craftsman. He started drawing horses at a very early age and found himself reprimanded in school for sketching instead of normal academic studies. He created many cartoonish birthday and special occasion cards and a number of bathrooms featured his artwork. Sculpture was his medium of choice, either cast in molten aluminum or welded steel. His sculpture of Teddy Roosevelt on a horse, resides in the North Dakota Heritage Center and State Museum in Bismarck North Dakota. He worked as a self-educated metal fabricator/engineer/designer. He built special equipment, creative signs and repaired everything from farm implements to custom motorcycle parts with the same desire for aesthetic perfection. Tubby was drafted and served in the Korean war (1952-1954). He worked at the Fargo Foundry till 1966 when he moved his family to Washington state to work in the sheet metal trades. He purchased the Pelican Welding shop in Pelican Rapids, MN in 1972 and operated it until 1980 when he took a position at West Central Turkeys in Pelican Rapids, MN until his retirement in 1993. Tubby was a lover of all animals, which included many horses, a stubborn mule, a goat, raccoons and all manner of birds. He especially loved dogs and had many a faithful companion. He also admired airplanes and classic automobiles from the 1930’s, He liked Louis Armstrong music and was a very memorable dancer. Tubby and Shirley enjoyed socializing with family and friends, there was always time and room for visitors to enjoy a meal, Coors Light and BSing. He achieved his dream of owning a 100-acre hobby farm east of Erhard from 1980 until 2015 when he and Shirley moved to Moorhead. Tubby was preceded in death by his son Jerry, parents, sister Fara Mae, brother-in-law Jess Grobe and many family and friends. He is survived by his wife of 64 years Shirley Mae Lund, Two sons: John (Linda) Lund, Fargo, ND and James Lund (Lois Pearson), Pelican Rapids, MN; Three Grandchildren: Nick Lund, Annie Lund and Peter Lund & great-grandson Ayden Pfeifer. Surrogate granddaughters: Karissa (Chad) Alfson and Kayla (Matt) Kruize, great- grandchildren: Koby Pearson, Jasmin Pearson, Deshaun Jean-Baptiste, and Brantley Kruize. Celebration of Life for Arlo and Shirley Lund: Visitation will be one hour prior with service at 2:00 p.m., Sunday, June 13, 2021, at VFW Post 5252, Pelican Rapids, Minnesota. Please keep the Lund family in your thoughts and prayers. Arlo "Tubby"'s Memorial Folder
To order memorial trees or send flowers to the family in memory of Arlo Lund, please visit our flower store.